From Murrieta, Southern California, USA to Honiara, Solomon Islands. How our newest Twin Otter flew 5362 miles across the Pacific and landed 30 seconds early. Two hours drive south of Los Angeles and an hour and a half inland, the city of Murrieta population 110,000, may seem a world away from Honiara, but it is also the home of IKHANA Aircraft Services, where Solomon Airlines’ newest Twin Otter aircraft was conceived.

They are especially renowned for finding and completely refitting Twin Otters providing a Re-Life® for one of the world’s favourite and most versatile aircraft, which are still in great demand.

Since its launch in 1965, the Twin Otter became the best-selling 19-seat passenger aircraft of all time, considered by many to be still unmatched for its dependability and versatility.

Over 500 Twin Otters remain in daily operation today, in the harshest environments, including sub-zero temperatures in Antarctica, the hottest deserts of North Africa, the mountainous regions of the Himalayas, and the open water of the Indian Ocean archipelagos. On 4 February 2021, Solomon Airlines new DHC-6 Twin Otter, which the IKHANA team called Aircraft 470, took off on its delivery flight from French Valley Airport near Murrieta in Southern California.

The aircraft had been completely refitted to include state-of-the-art navigation equipment, additional payload capacity, new interiors, and the proud blue, green and white livery of Solomon Islands’ national carrier.

For nearly two years, pending the interruptions related to the COVID 19 pandemic, Solomon Airlines had been eagerly awaiting its arrival.

Under the steady hand of AEVEX Aerospace DHC-6 Lead Pilot Captain Scott Tripp, the 19-seat De Havilland Twin Otter was to fly across the Pacific.  First from California to Hawaii, then past Nauru to Marshall Islands before heading further south to start a new chapter at its new home in Solomon Islands. “The acquisition of this Twin Otter aircraft was researched over a lengthy period of time and as it is similar to our current Twin Otters but with a higher operating weight and new modern airline equipment, we are pleased to have secured the best aircraft for future requirements.

“In the Solomon Islands, operations occur on rough surfaces which can lead to numerous instrument and gauge failures on older Twin Otters. Repairs to the old instruments are expensive and cause downtime.

“This aircraft is fitted with an airline grade digital avionics system which not only saves a considerable amount of weight but will also reduce the likelihood of downtime for mechanical instrument repairs,” he said.

“It will enable us to move more people and cargo more efficiently in the Solomon Islands, producing better service for our customers and better economies of scale for our business,” Mr Gebers added.

“We started the process of purchasing a new Twin Otter in 2018 and we have been interrupted as have all airlines, by the COVID 19 pandemic and international border closures which severely impacted our business,” he said.

“We have expressed our appreciation to the Solomon Islands Government for assistance which enabled us to finally complete the purchase and take delivery of the aircraft,” he added.

IKHANA Aircraft Services received final approval to ferry the aircraft from the USA to Solomon Islands at 3.00pm on 3 February 2021.

“The first leg of the trip was only 1.5 hours where we repositioned the aircraft to Santa Maria, California which was to be our departure point en route to Honolulu,” said Captain Tripp.

“That short first flight allowed us to test the ferry fuel system inflight and check fuel burn rates at our proposed crossing speeds.  All of those checks were successful, and we were very happy to finally be on our way to Honiara,” he said.

“As is usually the case at this time of year in the Pacific, the weather was a key consideration. Strong headwinds were predicted between Santa Maria and Honolulu beginning on 5 February. “On the morning of the 4 February, at 6.00am we departed the US mainland for Honolulu, fuelled with 1200 gallons which would provide us with over 15 hours of flight time.

“The first leg of the Pacific crossing was scheduled to take 13 hours and 45 minutes and we were expecting average headwinds of around 5 knots for the flight.

“We flew between layers of clouds for the majority of that flight and while visibility was great outside of the clouds, there were only a few broken patches where we could see the beautiful blue waters of the Pacific Ocean far below,” he said.

The Twin Otter and crew arrived in Honolulu just after dark, landing with thunderstorms and rain showers in the vicinity.

“Unfortunately we couldn’t get any pictures of the arrival, but the Garmin 950 NXi navigation equipment worked flawlessly.  The Autopilot was used for most of the flight and also for the approach. We were pleased to land with over 1200 lbs. of fuel, beating our planned expectations by over 500lbs.”

Unexpectedly, due to COVID-19 considerations, the next leg of the journey from Honolulu to Majuro Atoll, Marshall Islands, was subsequently delayed for six further days awaiting approval to land in Majuro and use overnight facilities for crew rest. Photo: View of Twin Otter on the tarmac from the crew rest at Honolulu Airport

Once approval was granted, this second leg of the Pacific crossing would again be over 14 hours with the weather predicted as overcast layers and headwinds of around 5 knots. This meant another 14-hour flight using IFR (instrument flight rules) in and out of clouds at 14,000 feet.

“We departed Honolulu at 6.00am on the 11th of February en route to Majuro Atoll, Marshall Islands. There were a few breaks in the cloud layers, and we did get a glimpse of Johnston Atoll along the way,” said Captain Tripp. Photo: View from the Twin Otter flying above Johnston Atoll

“Not long after Johnston Atoll the weather took a turn for the worse and we flew using solid IFR the rest of the way, varying altitudes and headings to avoid icing conditions and numerous thunderstorms that were building in the area.

“The Weather Radar and EVS camera assisted us in finding the best way through the worst of the weather and soon we were on approach to Majuro Atoll. Photo: Example of the Garmin 950NXi weather displays in the Twin Otter cockpit

“The FM radio installed in the aircraft also worked flawlessly and kept us in constant contact with Flight Service for the duration of the flight.”

Using the Garmin 950NXi navigator coupled to the autopilot, the Twin Otter landed flawlessly amidst a monsoon downpour.  The aircraft was refueled for the final leg planned for the following morning and the exhausted crew slept the night as the monsoonal rain continued until the early morning hours. Photo: Twin Otter rests on the tarmac during a rainy night at Majuro, Marshall Islands

The second Pacific crossing flight had taken 14 hours and 30 mins of mostly hands-on flying. The final leg of the Twin Otter delivery flight would be 8 hours starting early in the morning.

“We planned for a 4.00am departure from Majuro to place us arriving in Honiara at 11.00am local time,” said Captain Tripp.

“Fortunately the weather had improved overnight and the last leg of the delivery flight was, for the most part uneventful,” he added.

At sunrise, the beautiful blue Pacific Ocean stretched out before the aircraft and the crew soon knew they were crossing the eastern shorelines of the Solomon Islands. Photo: View from the Twin Otter above the shoreline on approach to the Solomon Islands

After an epic delivery flight with the crew of the tiny 19-seat aircraft charting its course over the vast Pacific Ocean, they had flown well over 40 hours, and Aircraft 470 soon to be Solomon Airlines Twin Otter Registration H4-SIC, had performed without a fault.

“The DHC6300HG Twin Otter X2™ provided performance and capabilities to spare, giving this old pilot the confidence and ability to cover 5362 miles of the South Pacific Ocean, placing us at the touchdown point in Honiara within 30 seconds of our planned arrival,” said a delighted Captain Tripp.

“I would like to thank the entire support team and facilities of Solomon Airlines in Honiara. That shower, lunch, and rest before our flight straight to Brisbane was very much appreciated!” he added.

“I hope now that you enjoy flying her (DHC6-300HG Twin Otter X2™) as much as I have, and that you gain the confidence and capacity to provide your passengers with great connections throughout the Solomon Islands.“ Unlike its long-haul delivery flight, the new Twin Otter will enter service on Solomon Airlines' much shorter domestic routes following the completion of crew induction and training.

The national carrier also operates a De Havilland Dash 8-100 aircraft on domestic routes and an Airbus A320 on international routes. 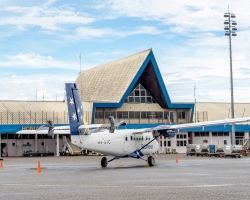