Solomon Airlines to expand domestic operations with return of Dash-8

Solomon Airlines will ramp up domestic operations across Solomon Islands from October following the return of the airline’s Dash-8 aircraft next month.

Following crew refresher training, and reinduction requirements, the aircraft will re-join the fleet from Monday 3 October to operate between Honiara and Munda, Gizo, Auki, and Kirakira, with additional destinations to be considered.

“The re-introduction of the Dash-8 will allow us to increase capacity significantly to Munda and Gizo, and to improve the efficiency of our operation,” said Solomon Airlines CEO Mr. Gus Kraus.

“Under our new schedule from October, we have ensured that connectivity between our international and domestic flights is as seamless as it can be, especially for key tourism destinations Seghe, Munda, Gizo, Suavanao, and Marau,” Mr. Kraus added.

“This will also improve access for inbound tourists travelling via our Brisbane and Nadi hubs,” he said.

“As we rebuild our operations, we will continue to monitor demand and assess our fleet to ensure that we manage costs and meet future demand as is appropriate,” he said.

The reintroduction of the Dash-8 aircraft has allowed Solomon Airlines to build an expanded domestic schedule, so existing passengers can expect some variations to upcoming flights, including:

Other Solomon Airlines services may be affected by time changes under the new schedule.  The airline will endeavour to contact all passengers on services with adjusted departure times. 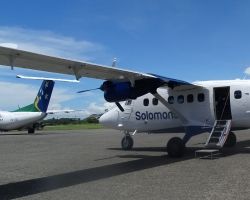 Regular passenger flights to Temotu to restart this week