Honiara, Solomon Islands – The Solomon Islands and Vanuatu have reached agreement for a new Air Service Agreement (ASA) and Memorandum of Understanding (MOU) between the two countries.

The Vanuatu team met with their Solomon Islands’ counterparts including Permanent Secretary for the Ministry of Communication & Aviation, Moses Virivolomo together with the Civil Aviation Authority of Solomon Islands (CAASI) Director, George Satu, Solomon Airlines CEO, Captain Ron Sumsum and his team.

Representatives from the Solomon Islands Prime Minister’s Office and the Ministry of Foreign Affairs & External Trade were also in attendance.

Speaking at the official signing at Honiara International Airport, PS Virivolomo said while some changes were made to the current ASA and MOU, the key to the new agreement was to have in place a clear record that took away any guesswork or ambiguity from future negotiations between the two countries.

“The meeting between both parties marks the beginning of an initiative to review all current ASA’s between member states and the Solomon Islands and its stakeholders,” PS Virivolomo said.

“Naturally we are trying as a country to ensure that firstly, there is no repeat of the impasse that took place between Fiji and the Solomon Islands last year and just as importantly, that reciprocity and fairness remain paramount with all our ASA agreements.”

The newly signed ASA and MOU follows last month signature of watershed codeshare agreements between the national carrier and Qantas Airways and also with Air Niugini.

Both agreements form the basis for further corporation and other similar arrangements promoting regional aviation as one sector and in general, are intended to encourage further   collaboration among Melanesian Spearhead Group countries and carriers.

The Melanesian Spearhead Group (MSG) is an intergovernmental organization, composed of the four Melanesian states of Fiji, Papua New Guinea, the Solomon Islands, Vanuatu and the Kanak and Socialist National Liberation Front of New Caledonia. The group orchestrates preferential trade agreements and supports economic development within its membership. 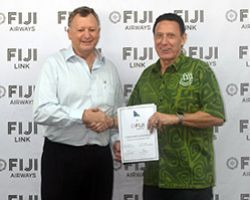 New Links in the Northern Pacific