“The time is right to reintroduce greater inbound capacity and to ensure we are making it as easy as possible for visitors to fly to Solomon Islands and to transfer to and from our major tourism centres without overnighting in Honiara,” said Solomon Airlines CEO Brett Gebers.

Effective from 3 October 2022, international flights between Brisbane and Honiara will increase from twice-weekly services to 4 x flights weekly in both directions.

Solomon Airlines flights between Honiara, Nadi, and Port Vila will continue to operate on Tuesdays, with the return service to Honiara operating on Wednesdays.

Services between Honiara and Tarawa will operate on Saturdays, returning on Sundays via Honiara.

Under the airline’s new schedule, flight and connection times have been designed to streamline travel between Brisbane and major tourism destinations like Gizo, Munda, Seghe, Suavanao, and Marau.

The airline will resume scheduled flights between Honiara and Marau Airport as part of this schedule, with an agreement between the local landowners expected to be formalised in the near future.

Easy same-day connections will be possible in both directions, including:

Flight frequency will also increase on other domestic routes including between:

To check schedules for upcoming travel, click here. Book flights online, or through the airline’s Reservations and Sales Offices. 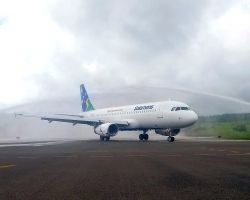 Message from our CEO this Independence Day